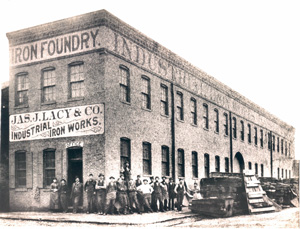 1865-a year to remember!! The surrender of General Lee in Virginia, and the opening of Industrial Iron Works.

1865 saw the beginning of the golden age of cast iron. Engineers and builders saw a new era when instead of wood they could now cast iron for bridges, columns, trusses, and struts of every kind.

In 1865 five molders returning from the campaign in Virginia decided to go into the foundry business. A small building was purchased in Fells Point, Baltimore and a small furnace for melting cast iron was built. They were in business! The gleam in their eyes soon disappeared and in a few years four had sold their shares in the business to James J Lacy.

James J Lacy carried on the business. James was a good molder and business man. He was known as being progressive and civic minded. James J. Lacy died, well known and prosperous in 1906.

The business was continued by his son, Joseph J. Lacy. Joe decided what was good enough for Pop was not good enough for him, so he had the business incorporated and started to expand, by adding on to the buildings and starting a bronze foundry. With the First World War, the foundries were kept busy making large steam cylinders for liberty ships, pistons, propellers, and all types of marine castings. The bronze foundry was busy making bearings, bushings, and marine fittings. Joseph died in 1924 and left the business to his son James J. Lacy.

James J. Lacy was still in college when his father died. Cutting short his schooling, he started working in the foundry, spending time in each department to acquire a good overall picture of the business.

The Second World War gave the company a shot in the arm, so James decided to expand further, adding an aluminum foundry. During the war, supplying the marine industries meant working round the clock. After the war the business continued to prosper, ship repairs continued and expanding business into the steel and bronze mills improved the overall picture.

James J Lacy was active in business and civic affairs of the town becoming Commissioner of the Fire Board of Baltimore City and later State Comptroller under Governor Lane.
In 1950 James J died and the business was continued by his wife, Rose who appointed A.H. Reifschneider as General Manager. This was from 1950 thru 1956.

Joseph J Lacy Sr. was a freshman at Loyola College when his dad died. After graduating from college he spent two years in the U.S Coast Guard and entered the foundry business in the summer of 1956.

He also worked in the various departments in the foundry. Thru the knowledge he gained, Joe decided to modernize the plant, putting in labor saving devices, sand controls and a new line of thinking. It was also time to revitalize the sales department by expanding the territory to other states beyond Maryland.

In 1972 Joe acquired Pennsylvania Bronze Foundry in Harrisburg, PA. In 1996 Joe Sr. retired from the business, but was an active consultant to Joe Jr. until his death in April 2017.

In 1978 after graduating from college, Joe Jr. started working at Lacy Foundries. He was a hands on person and learned every aspect of the business.

In 1988 just after the birth of his 4th child, a fire destroyed the brass foundry and crippled the iron foundry for 6 weeks. All the brass orders from the Baltimore plant were sent up to the Harrisburg plant to be made. Six weeks later the iron foundry started back up and ran until 1996 when development started taking place and there was no more room for a smoke stack industry. The Fells Point area became highly desirable by developers and we were forced to close down due to eminent domain.

We had always worked with other foundries that were set up for the smaller work to broker our work to them.

With this in mind Joe Jr., wanting to stay in the business, decided to broker the work and keep the relationships between customers and vendors through excellent communication while facilitating the production of the finest quality parts. He is able to choose the best foundry, machine shop and pattern shop for each particular job, offer competitive pricing and the best customer service available.

Joe Jr. has served on the board for the Non-Ferrous Founder’s Society (NFFS) and the American Foundrymen’s Society (AFS). He has developed strong relationships with other foundry owners enabling him to choose the foundry that has the best set up for each particular casting needed.

Joe continues his relationships with the foundries and customers. He is always looking to expand his customer base and seeking out other foundries.

*Years active in the business.